Staggering statistics and valuable knowledge behind the narcotic crisis 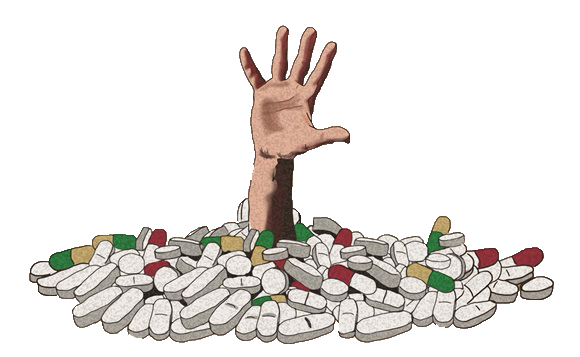 HERRIMAN— While driving along any highway in Utah, huge billboards plaster the roadside, all strewn with statistics about the drug crisis in Utah. Some boards have catchy slogans, “Heroin. Pills. It all kills,” while others reach more personally to the viewers: “Did you know? 90% of drug and alcohol abusers start in their teens.” But these billboards only capture our attention for a few seconds, and our minds quickly stray from the messages these boards convey. Does anyone actually understand just how large the drug epidemic in Utah has become? According to Opidemic.org, Utah has the 7th highest drug overdose rate in the United States. A government-funded group called the Violence and Injury Prevention program came out with a statement saying, “opioid overdose deaths are highest in Carbon, Emery, Duchesne, Juab, Weber, Salt Lake, and Tootle counties, where rates are above the state average of 20.3 deaths per 100,000 population. While the number 20.3 out of 100,000 may not appear to be high, it seems like everyone somehow knows a person in Utah who has been affected by this drug and opioid specific crisis.

Opioids have gained major attention in the news and media, as the epidemic stems all across the United States, but not everyone knows what these drugs even are. Opioids are highly addictive narcotic substances, commonly prescribed to treat pain. You read that correctly- most of the drugs that are causing this nation-wide epidemic are prescribed by doctors. Opioids are addictive in nature because they change the chemistry of the brain, which leads to drug tolerance. Eventually, users will need a higher dose of the drug, in order to achieve the same effect.

According to the Center for Disease Control and Prevention (CDC), “more than 191 million opioid prescriptions were dispensed to American patients in 2017… Alabama wrote almost three times as many of these prescriptions per person as those in the lowest prescribing state, Hawaii.” One study, based on 2010 data, showed that inappropriate opioid prescribing rates are substantially higher among Medicaid patients than among privately insured patients. So if we have the knowledge about how dangerous and addictive these drugs are, why are they prescribed at all?

The rise of the prescribed opioid epidemic began in the 1990s, when professional and consumer groups pushed for the increased use of opioids for pain management after pain was recognized as “the fifth vital sign” by the American Pain Society. Happening simultaneously with the change in the medical perspective of opioids, was the extensive marketing for OxyContin (oxycodone) by sales representatives. These representatives visited doctors all around the states and impacted their opinions through “gifts, free patient samples, and invitations to all- expenses- paid symposia” (The Pharmaceutical Journal). In 16 years, global OxyContin sales paralleled those of other opioids, such as morphine and codeine, and increased from $48 million to over $2.4 billion. Coinciding with this rise in sales, the number of prescriptions written for opioids increased in almost every nation.

We see the opioid problem on a nationwide scale, but it also affects small-town communities that you would never expect. According to an article written by Chris Conover, former Duke University research scholar, “In 1958, per capita health expenditures were $134. By 2012, per capita, health spending had climbed to $8,953.” Because the cost of health care has skyrocketed over the past several years, many people simply cannot afford it, subsequently putting themselves at a bigger health risk. For example, a patient could see a doctor for severe back pain, and be recommended for surgery, and then physical therapy. Besides the thousands of dollars worth of medical bills, this would result in, the patient would also have to take time off of work, and they cannot afford to do that. So instead they try to deal with the pain, along with the help of narcotic pain relievers. While these prescriptions cost less than surgery, physical therapy, and possible job loss, the patient will slowly become tolerant of the prescription, and subsequently, need a higher dosage to deal with their pain. This is only one example of the path that narcotic drugs take, forcing people to be wrapped up in a vicious cycle of use.

In order to prevent this opioid drug crisis from spreading further throughout Utah, and the rest of the United States, citizens have to become educated and aware of the dangers these narcotics present. Prescription painkillers can help many people deal with pain that inhibits them from doing daily tasks, but there is a thin and unpredictable line between healthy, and abusive, use of these drugs.