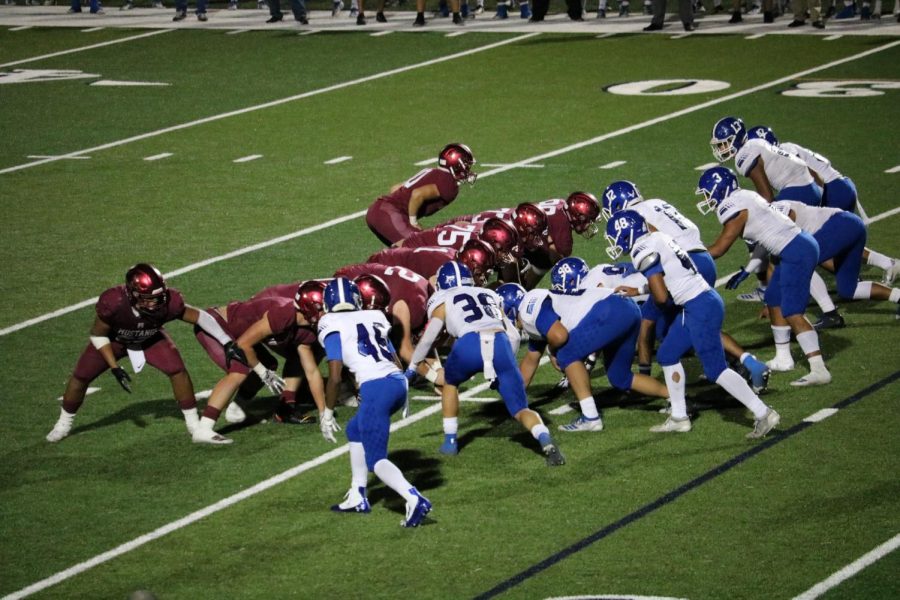 HERRIMAN- The Herriman High School football team defeated Bingham on Thursday night with a 24-14 win while breaking a seven-game losing streak against the Miners.

Herriman’s defense was a great contributor to the historic win. The Mustangs defense forced four turnovers and held Bingham to two touchdowns. “Previous losses helped us with our win tonight,” said senior, Mana Kula, when asked on how they managed to play so well.

Known as one of the best teams in the state, the Miners struggled to get on the board until late in the first half. Sophomore Tight End, Jaxon Fullwood, scored the first touchdown for the Mustangs with a 13 yd. pass with eight minutes left in the first quarter. Six and a half minutes later Kingi Fissipeau scored the second touchdown. The stadium went wild for this one after Fissipeau faked a punt and ran 45 yards. Herriman headed into the locker room 14-7.

The second half began with another scoreless quarter for the Miners. The Mustangs got their third touchdown of the game in the middle of the quarter, with a 20-yard touchdown pass from quarterback, Jaxon James, to Alex Anderson. Herriman ended its scoring early in the last quarter with a long 42-yard field goal from Caden Sydall. Sydall also completed the three previous extra-point attempts.

Defensive lineman, Tyson Ready states, “we prepared like any other game and we didn’t give up,” when commenting on facing Bingham. The Herriman football team looks to keep their defense up and stay atop region 3 with a hopeful win next week versus Jordan.