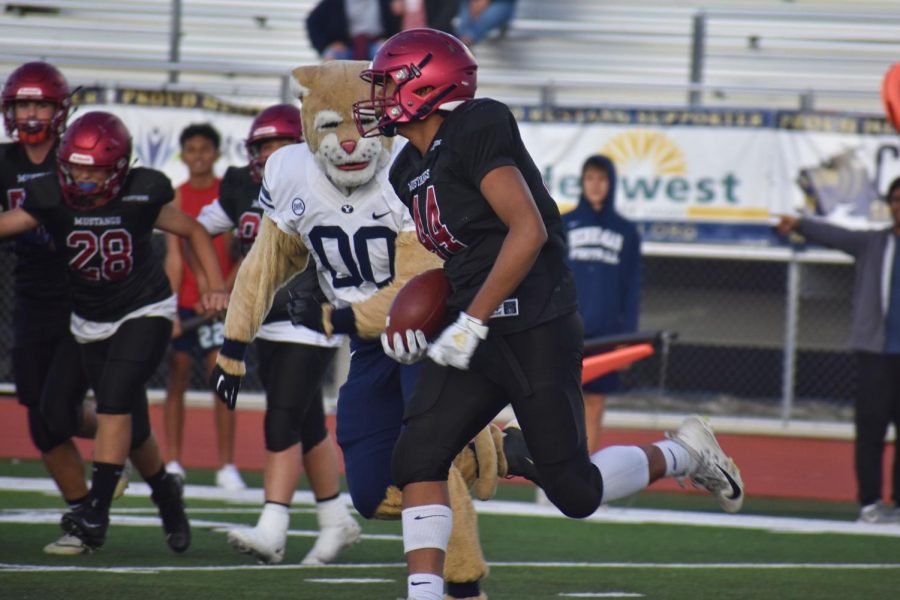 HERRIMAN– Monday night, the Herriman High football field was crowded with costumes as the Herriman eighth grade football team took on a team of local and national mascots in a game of tackle football.

The unusual brawl was for the 18th annual Mascot Bowl, previously held at Lehi High School. According to its founder, Jon Absey, the event started as a fun way to bring the community together. Now, it’s grown into an opportunity for the community to also raise money to take local underprivileged children Christmas shopping.

This was the first year it was held at Herriman and the school’s clubs and students wasted no time getting involved.

“We have literally been preparing [for this] since the summer,” said Peyton Bisquera, Sophomore Service Officer for Herriman High. The SBOs were out in full force to help the event run smoothly all night.

Hundreds of students, parents and children poured into the stands to interact with their favorite mascots and have a fun night of charity. Other festivities included performances by different cheer teams (including our own Herriman High cheerleaders) and Herriman’s marching band, a stunning halftime show by Aaliyah Rose and Charley Jenkins and raffles held by Hope Squad, among many others.

“Hyping it up and helping out” was the job of Herriman’s cheerleaders, including Alexis Jeffery, Kiana Scheithauer and Hadley Schaugaard. “Just knowing we’re helping families is the best part,” they claimed.

On the field were the eighth grade Herriman football players, who were a fierce force against mascots like University of Utah’s Swoop and BYU’s Cosmo.

When asked what they were most excited for prior to the game, eighth grade Herriman football players Dalyn Ellison, Taimane Brown, Semisi Fifita and Nicko Benavidez told the Telegraph, “The experience; not a lot of teams get to play mascots, and this will help us prepare for our next games.”

The night ended with a flourish of fireworks and a score of 18-16, with a win for Herriman. Most importantly, hundreds of dollars were raised to make the upcoming holidays extra special for kids in the community, proving that Mustang spirit is unstoppable when it comes to bringing good to the world.