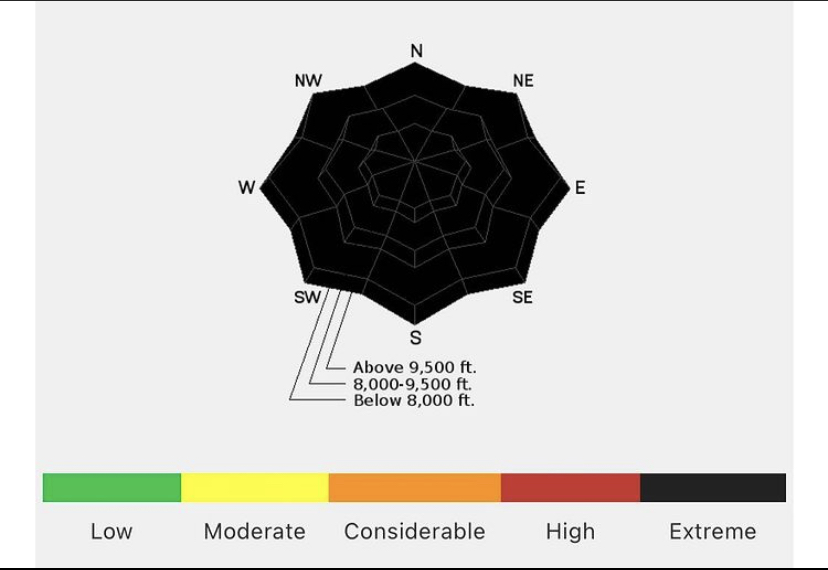 The avalanche danger for all Salt Lake mountains is recorded at the extreme level. photo credit: http://utahavalanchecenter.org

Avalanche dangers have risen in the last 24 hours, Wednesday 17th, and it is projected to be that way for the rest of the week.

As of Saturday the 14th, avalanches have been at moderate to extreme conditions, something that we see in Utah around December to January. Because of the late storms that have hit every single day in Big and Little Cottonwood Canyons, the avalanche danger for all Salt Lake ski resorts has moved to extreme in every category. This means that there’s a possibility that an avalanche could be triggered just by driving up the canyon. This was seen yesterday, February 18th, in Big Cottonwood Canyon when two vehicles were driving up the canyon and were sideswiped by an avalanche and taken off the road.

It is advised to stay off the slopes for the next upcoming weekend as much as possible, but if you were to find yourself in an avalanche area, you should pack some of the following; a collapsible avalanche shovel, and enough food and water to survive for at least 24 hours, a travel blanket, and some sort of a heat source, no matter how small. Having these items could mean life or death in an avalanche situation.

If you plan on skiing it is advised you stay in boundaries and in ski resorts, the risk is very high and the chances of survival even if prepared are very slim. There have been 22 deaths by avalanche this season alone, and due to the fact that the ski resorts will not be shut down, the chances of deaths are estimated to go up with this week’s snowfall. Stay safe and stay in the boundaries until the avalanche danger goes down to low moderate or considerable conditions.