How the staff is wrapping up the year all in one go. 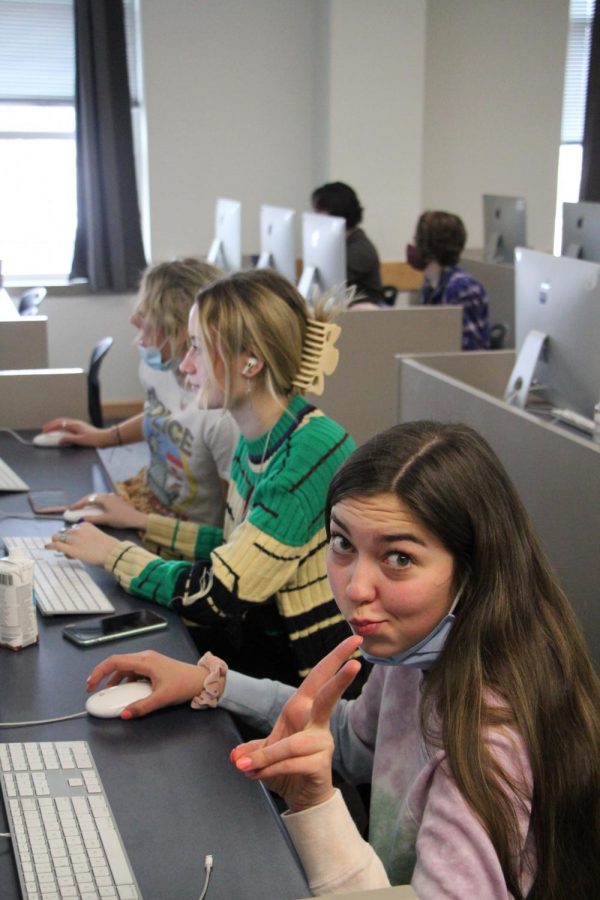 The energy starts with a slow tread of tired students on a Friday morning, a few people show up early, or some rush in with their hair falling out at places. The editors had arrived half an hour earlier to be brief and even share a few worried glances when they hear that the majority of the yearbook needs to be done by the end of the day.

It has been a long time coming and so the 2020  – 2021 HHS Yearbook staff starts their final countdown to the deadline. While rushing to computers Mrs. Holly Davis keeps the motivation high with the promise of pizza in order to combat the disgruntled and tired staff members.

It’s no joke that the Herriman High Yearbook staff has been cracking down on every team and club to get the last bits of information to put towards the book. At times it can be seen as aggressive or even just desperate but it is justified as the year has been fraught with difficulties and miscommunication between staff and Herriman High. Covid-19, in every situation, has made the easiest task difficult and the difficult tasks impossible. When I spoke to Photography Editor Charlize Lara between the coffee and energy drinks she said that coordinating with Covid restrictions, students, and coaches was particularly challenging.

Makalynn Christoffersen, another photographer, agreed, “Trying to get photos from teachers was really hard.” Amongst the staffers, they all agreed that when it came to getting anything from rosters to photos there would be bumps along the way. Not only that, halfway through the year a few things happened.

The yearbook staff originally used Adobe Indesign, a program that is specifically designed to help make layouts of different pages, whether that be magazines or newspapers. However, the company that the yearbook was published and printed by, Jostens, had created their own program that they would be requiring students use. There was a huge learning curve when it came to figuring out this new program. Any progress on Indesign wasn’t saved in the switch.
Many of the staffers were sad to see their former advisor Mr. Brent Cox leave during the tail end of quarter 2. If you want to read more about him leaving, read this article about it. The resulting switch meant a new advisor Mrs. Holly Davis stepped in to take the mantle. She too, having no experience with anything yearbook, had to learn from the very beginning and learn with the staff how to start making pace to keep up with the deadlines.
Theme change: there was a time that the theme wasn’t “21 things.” Midway through the planning process Mr. Brent Cox and the editors talked about changing the theme which put a wrench in the creative aspect. From there, they had to make new plans. Head-Editor Adalyn Burchard said, “The theme has been a challenge because it’s hard to define, find color pallets, fonts– so 100 percent of the big thing is the theme and figuring out what we need for that.”

In my time being a part of the yearbook team, it’s been an emotional process. Everyday I work on a page is days of trying to contact and collect information. To find these  I genuinely hope that those who get a yearbook see themselves and the moments that they got to have during the 2020-2021 school year. The year is something we consciously made the effort to make the best of any situation.

The staff is waiting to show their hard work. This Friday was something to remark as many of the staff were tackling the hardest parts of their work. Buchard says, “They will enjoy the fun pages we will see in the beginning, we added a ton of new pages but we also shortened the book significantly. I think they’re going to enjoy the new pages but also be a bit sad about the ones that were cut.”

So, Will the book be done on time?  The answer is an anxious yes.