About the Books I’ve Read 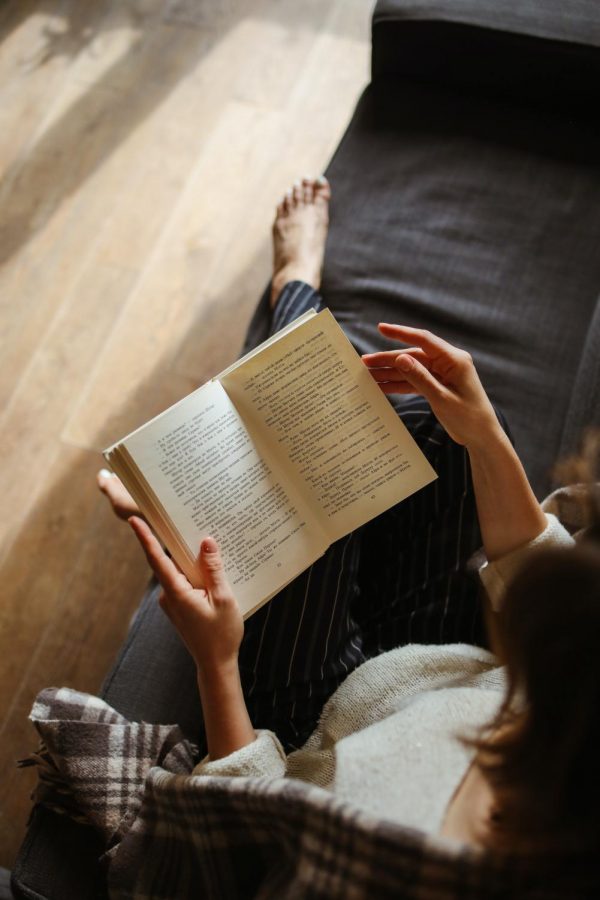 When I was sitting down for my plasma donation yesterday I pulled out my book to read while I sat around. Much to this older gentleman’s surprise, he remarked, “I didn’t know kids still read books these days.” I took no offense but looking around the facility every adult was on their phones watching some video or scrolling to a platform like Facebook. Reading while on the internet is still reading but I think there is a distinction between material that was made to catch your attention for a moment and really consuming media made to tell a narrative story.

While I was thinking, I already took a sci-fi fantasy class taught by Mr. Mckay Campbell (If you’re an HHS student I recommend that class if you want to have book talks and a fun time.) he mentioned that he would have students that didn’t read at all. Personally, as a book fanatic, I know some of my friends aren’t fans of reading but they never gave me a rhyme or reason as to why?Of course, the traditional answers are “I’m busy” but even the bookworms I know are busy but find some time in their day to read a page or two. I sent out a survey to the student population to see if I could get some information on what’s going on.

According to Senior student Caleb Gagnon, “I don’t read because of a mixture of two things. One is that I simply haven’t had the time or space to read a book and think about it on my own time. Another is I am very picky on books, I really only consider picking up those that really interest me.” Which is fair, between events, sports, classes, and life sometimes reading is difficult to squeeze in. In a 2015 statistic published by the Pew Research Center, the average American reads 12 books annually but 27% of the population hasn’t read a single book in the past 12 months.

According to my survey, the average Herriman High student reads 27 books yearly though this can be chalked up to some of us being invested, reading up to 100 books yearly or the base amount of books one has to read for school raises the skew.

Though some students do read books in unprecedented amounts of time, and when I asked what started this love and zeal for reading Micaella Duncan, a senior, said, “I was about 8 or 9, reading under the covers with a flashlight. I always thought I’d get in trouble for it, but my parents knew about me reading late at night and they just let it happen because it was “better than me not doing anything academic”

Another student Lily Nicole Anderson said, “I’ve loved reading since I was a toddler! I learned how to read when I was around three. I remember when I was in second grade, the lowest reading level I would read was fifth grade. I would check out a book a day and just read all afternoon when I got home! I have really bad anxiety, so I got bullied a lot as a kid and didn’t have any friends for a long time. Reading is what made me feel happier and made me feel less alone. I have friends now and don’t get bullied as much, but reading still gives me that good feeling.”

In light of summer is around the corner there are a few book suggestions that readers at HHS recommend, don’t forget that Salt Lake City’s library has an online database where you can still check out books and read on your phone. It’s called Overdrive and if you have a library card or have a school email account it’s totally free to use.

The Invention of Hugo Cabret.

It isn’t even a good book, I just resonated with it as a child. The book is about an orphan living in a clock tower who attempts to fix an automaton–the last thing Hugo has to remember his father by.

“The Wrath and the Dawn” by Renée Ahdieh:

One man (of course) keeps killing women (no surprise) so one woman decides to kill him by telling him stories every night so that he doesn’t kill her.

Emma note: This is one that many people suggested, this touches on morality so if that interests you along with the human experience I would recommend this one as well!

“The Way of Shadows” by Brent Weeks:

A very complicated world of assassins and magic.

Emma note: To further interest you, the story is about Azoth, a lowly ranking member of an assassin who dreams of becoming powerful with magic. However, when he tries to leave it all behind something really happens…

Emma note: From what I see from good reads you follow Simon and Baz (who just so happen to be a vampire) get into all sorts of hijinks together that put their relationship to the test. Be prepared for heartbreak and lots of tears once you’re done!

To Dream of White & Gold by R.K Hart

It’s a fantasy book about a girl named Lida who discovers she possesses certain powers and leaves her hometown to study with other gifted people, only to discover that she harbors a kind of power that has been thought extinct for centuries. It was a really great book, well thought out magic system, and even the romance in it was superb!

Emma note: This book was recently published, but looking at the Goodreads this has a lot of world-building, lore, and good character building! Not only that the cover does look really cool!

Home for Christmas by Annie Groves:

The story of a group of girls, all coming from different backgrounds, living under the same roof, stuck in the miserable wartime London. The story that makes us realize what a sin war is!

dividing Eden series. I find it beautifully written, and the world-building is really mesmerizing. I wouldn’t want to spoil you on it, but basically, it’s about twins that are battling for the crown of Eden through various challenges.

I find it beautifully written, and the world-building is really mesmerizing. I wouldn’t want to spoil you on it, but basically, it’s about twins that are battling for the crown of Eden through various challenges.

The Compound by S.A. Bodeen

It’s supposed to protect them, right?

Emma note: I have read this book back in 2019, it wasn’t bad per say, it touches on some things that are pretty intense but overall if you like good survival twists this book is a quick read.

On Guard by William Lane Craig.

It was such a wonderful book, and probably the only book I keep rereading, do check it out if you have big questions like Why are we here? What is our purpose in life? Etc.

Vietnamese protagonist and his mom share their own take of certain fairytales as a way of bonding with each other.

And Then There Were None by Agatha Christie

The book is about eight people who arrive on a small, isolated island after receiving an unexpected personal invitation. But then they start being murdered one by one.

An assassin learns how to make friends instead of killing them.

The Knife of Never Letting Go by Patrick Ness

Set in a futuristic world, where humans completely destroyed earth and had to move to a different planet. Something is very different about the world though, the people think out loud. The story follows Todd and his journey running away from his town after finding our dark secrets about its past.

The Program by Suzanne Young

The suicide epidemic is slowly becoming more real every day in 2021.

Emma Note: Warning, this book does touch on suicide and depression, be very aware of that going in since it’s a central topic dependant on the story.

A small-town farmer with little political ambition becomes top general of the Civil War and a two-term President.

Emma note: If you have taken Mr. Campbell’s SciFi/Fantasy class you know how much he recommends Sanderson’s work! Not only that I’ve read his Reckoner’s series and began on the Stormlight Archive and Mistborn Series! If you want a good thinking book to get invested in and to fill your time with good writing I recommend his books.

The 5th Wave by Rick Yancey

It’s a trilogy about aliens coming to earth and wiping out the human population using deadly forces, from taking away all the power, placing aliens disguised as humans on earth, and more. It follows the journey of a ragtag group of some of the last remaining humans and how they try to survive and save humanity.

A Court Of Mist And Fury – Sarah J. Maas

Broody batman falls in love with stinky human and its cute.

Emma note: This is the second book in the series so if you want a fun romance fantasy start with A Court of Thorns and Roses

The Giving Tree by Shel Silverstein

It is about a little boy and a tree who loves him very much.

Emma note: I thought this was a very fun suggestion and a classic! Definitely, something I’d read to children though.

A writer visits a book club, that takes place during the war.

This is the book series where a young boy basically says “screw you” to the Gods repeatedly.

Emma note: Huge sucker for Percy Jackson, despite its younger demographic it is wonderfully realistic for the teenage experience and loveable character. Rick Riordan takes care in portraying the Greek mythos in an easily understandable way that will suck you into the magical world of mythology

Steelheart is one of my favorites, it is in the distant future where there are superheroes, but most of them are evil, and the main character is a part of the resistance who is trying to take them down.