Underpaid and Overworked – the Teenage Workforce

Teens are stuck at the $7.25 minimum wage. Companies are also understaffed and putting more pressure on teens. Things need to change. 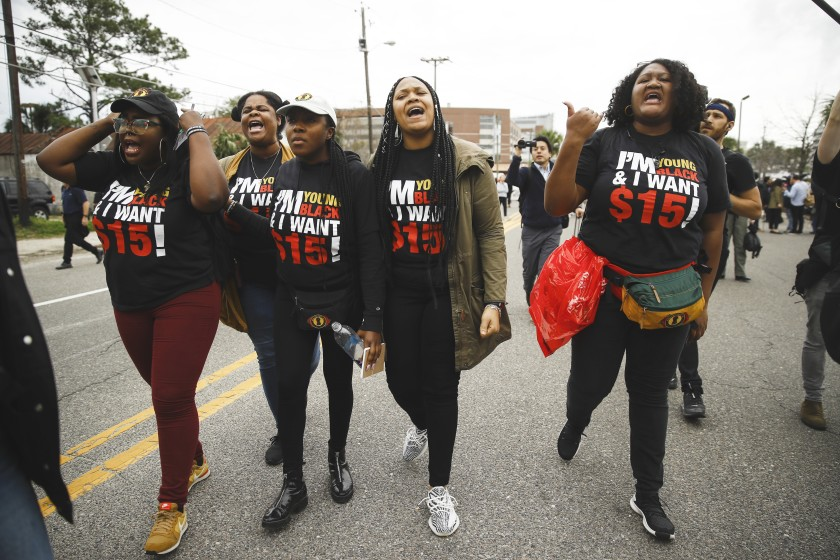 About 70 percent of the US population thinks we should raise the minimum wage to $15 an hour from $7.25 an hour. Currently, 17-18-year-old teenagers are starting to think about what they want to do with their lives. Some want to go to college, get a car, a place of their own, and also move away from their parents. But teenagers are so underpaid that they won’t be able to achieve these goals.

Teachers and parents talk about how successful we could be with a high paying job and having no debt, but how can that happen if the only jobs teens can get,  pay minimum wage, which has been the same since 2006. Having more money means teens can save their money for the future to help with college or hospital visits and any other high paying costs.

According to Pew Research Center, the US “states, and cities can set their own minimum wage rates,” so then why do 22 states still have a minimum wage set at $7.25 an hour? You could argue that it’s because the legislature wants to keep more people working so they keep it that low. But if it was to increase, according to Lily Roberts and Ben Olinsky, it could “stimulate the economy.” And with that comes an increase in teenage pay with more money in their pockets. This could give teenagers the help that they need to get their life where they want them. That’s just one issue, the second one is being understaffed at work.

Having understaffed workers can put a big strain on the job. It makes people do more work than what their job title includes. If teens were to do more work than needed then they should definitely be paid for their own job and the extra work they do. If jobs were to hire more people, then teens wouldn’t have to do more work than needed. Which could boost more people being happy and wanting the job. If the staff was to increase, teens would most likely be applying for more jobs, which could help with the understaffed. Having a strong staff can most likely improve the productivity and happiness of the employees. Research done by Oxford University said, “Workers are 13% more productive when happy,” and that can help with stress when it comes to responsibilities because the more people the less responsibilities you have. Having less stress can really benefit a teenager who has school work, sports practice, clubs, and other responsibilities at home.

Tara Blankenship, an account manager for Hello GM said, “Having an increase would help get more things done and would help me respond faster with clients or customers,” having happy customers could do a lot with the business morale. With higher morale comes more teens to work at a successful place, as well as providing better product quality and service done by the workers. It can also help with teamwork and helping people become more social with their coworkers.