Effects of Pollution and Algae Bloom on Lakes in Utah 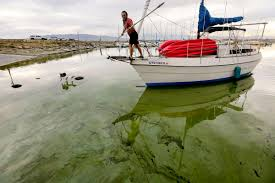 Multiple Studies made by UNESCO Found that Pollution contributes to Over 1 million marine animals (including mammals, fish, sharks, turtles, and birds) death, each year due to plastic debris in the ocean. Further studies have shown Excessive nutrients from sewage outfalls and agricultural runoff have contributed to the increasing incidence of low oxygen (hypoxic) areas known as dead zones, where most marine life cannot survive, ultimately resulting in the collapse of some ecosystems,

That may never recover and be permanent damage

Factors that play into pollution are the disposal of toxic waste in which the government lets large companies do with no consequences, and plastic from large landfills that blow into the water.

Not only do these plastics get eaten by all sorts of animals and take years to decompose, but they also turn into microplastics and get into the bloodstreams of fish. Furthermore, these animals get eaten by humans and get those same plastics into our bodies.

Even though we live in Utah, we still get fish exported here who could have those same microplastics in their bloodstream.

Pollution has also caused problems in ecosystems of lakes and other regional water bodies. Raw sewage has been dumped into the Utah lake as late as 1967. Pollution problems remain; the lake’s phosphorus and mineral salt levels violate the Clean Water Act.

The Clean Water Act is a primary federal law in the United States governing water pollution. In recent years, the lake has been prone to harmful algal blooms or also known as HABs.

HABs or harmful algae blooms occur when colonies of algae get out of control (Algae are simple plants that live in the sea and freshwater), they produce toxic or harmful effects on humans, fish, marine mammals, and birds.

Utah gets most of its water from precipitation and snow that melts into our rivers and flows down our mountain range and gets collected.

An Environmental scientist named  Suzan Tahir collected water samples during the 2017 harmful algae bloom on Utah Lake. Excess nitrogen and phosphorus in water bodies were discovered. It is becoming a growing problem in Utah and across the country.

Nutrient pollution is a form of water pollution. It refers to contamination by excessive inputs of nutrients. It is a primary cause of eutrophication which is the excessive richness of nutrients in a lake or other body of water. Usually, nitrogen or phosphorus, stimulate algal growth.

Things These ways can help fix/help the algae blooms is by preventing Runoff from Fertilizer,

Committing to just one of these things can lower the chances of an algae bloom occurrence every summer.                  Every Year Utah is faced with drought, this, combined with the algae bloom make things much worse.