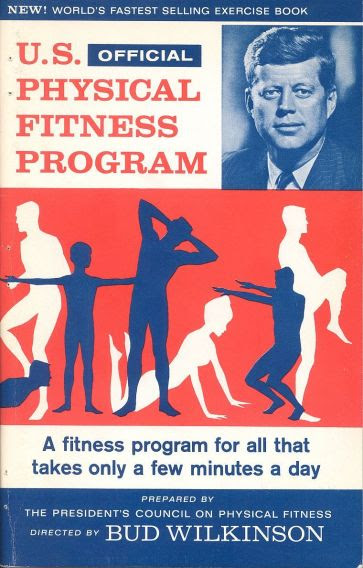 Most kids in school wonder why they have to take Physical Education (PE) to graduate. The first reason that usually pops into people’s minds is the obesity levels in America, in comparison to the rest of the world. While that is a big reason I´ll bet that you don´t know how it all started and that’s what you’re going to find out today.

It is the 1950s, we are in a post-WWII America. The war has been over for about a decade and the youth is getting more and more obese. People are worried that another war could happen at any second and that our army wouldn’t be as capable of engaging in physical combat.

Enter John Fitzgerald Kennedy, who shared similar worries with the public and was very outspoken on this topic even before he was elected for president.

Once he was in office, one of John Kennedy’s biggest goals was to improve the physical fitness levels among the American population.

He ordered the creation of a ¨White House Committee on Health and Fitness.”They were founded to engage, educate, and empower all Americans to adopt a healthy lifestyle that includes regular physical activity and good nutrition. JFK also created a workout book for American schools to try out and improve students PE test scores, though it was advertised as a “fitness program for all that only takes a few minutes a day.”

If you think today’s PE classes are hard, you should see one of California’s schools curriculums from the 60s. I won’t go into too much detail about this, but I will link the article if you want to read more about it.

The basic idea was that there were rankings of how good you were in the class, white, red, blue, purple and gold shorts. White being the lowest and easiest rank and gold being the hardest and most physically demanding, only three people in the history of the school had earned gold shorts The class is rumored to have been harder than being in the marines.

So I bet you’re wondering why there are certain things we do in PE, like why do we have to play games?

¨Games are a laboratory where children can apply physical skills in a game setting. Through games, children can experience success and accomplishment. They can develop interpersonal skills, understand rules and limitations, and learn how to behave in various competitive and cooperative situations.” This is a necessary skill that all people need in life. “Many games help develop large-muscle groups and enhance the child’s ability to run, dodge, start, and stop under control while sharing space with others. By applying strategy in games, children learn the importance of alertness and the mental aspect of participation.” (An excerpt taken from Dynamic Physical Education for Elementary School Children-19th Edition.)

So now you know why we have PE classes and why we do the activities we do in PE. While it’s not always fun, we do have good reasons for having the class.