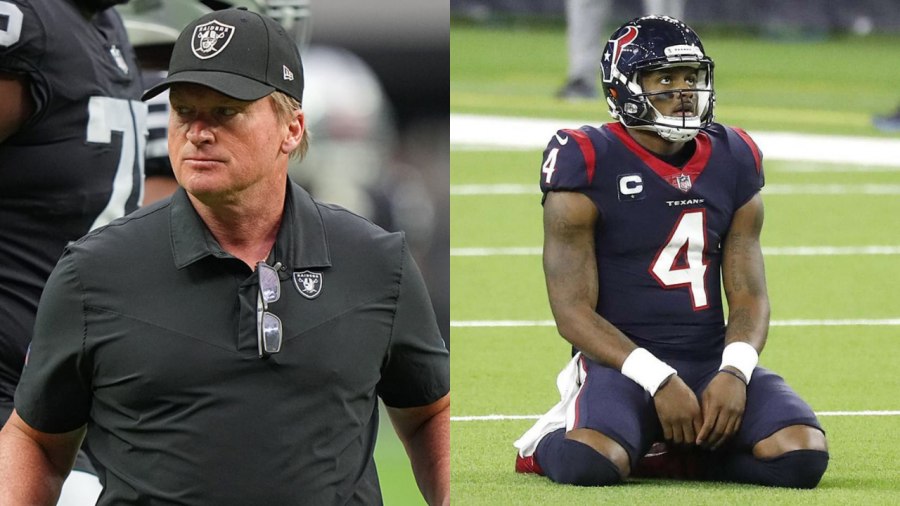 On October 11th of this year, Las Vegas Raiders coach Jon Gruden resigned from his position as head coach of the team. The reason for the resignation was the discovery of thousands of emails sent and received by Gruden that included racist, misogynistic, and homophobic remarks. But after the news came out, many people began to realize the double-standard that the NFL has, especially when it comes to the talent level of its players.

Deshaun Watson is currently a Quarterback for the Houston Texans, although he isn’t playing. Watson played at Clemson University in college, and even led his team to a National Championship in 2016. He was drafted 12th overall in the first round of the 2017 NFL draft, and came out of the gate as a good, reliable QB. The Texans were instantly boosted by the pickup, and Watson excelled in the league. But soon, his career would change forever.

It came out that Watson had sexually assaulted massage therapists on multiple occasions, at different locations. Lawsuit after lawsuit was filed against Watson, and he immediately was thrown into a courtroom, and prevented from going on field. In total, there are 20 lawsuits against him that he is still settling.

The issue people have with this is that the NFL would still allow Watson to play today despite the lawsuits and allegations, while Jon Gruden, who only spoke words, through email, would be forced into  resignation by public outrage. It seems that the NFL values the talent that someone would bring to the league, rather than things like allegations of sexual assault.

But Deshaun Watson is not the only case of this. Over the history of the NFL, there have been a countless number of players that have continued to play despite allegations of sexual misconduct, assault, and even murder. Players like Thomas Henderson, Aaron Hernandez, Michael Vick, and more. Richard Sherman even found himself in trouble with the law after banging on his father-in-laws house door to let him into the house. In the video, you can see him body-slam the door, aggressively knock, and yell to be let in.

These incidences of violence are nothing new to the league, though, in fact, it still happens today. American football is considered to many as a very violent sport due to the high contact between players. It’s not surprising to see these players committing these acts due to their supposed exposure to violence. In 2019, Cleveland Browns player Myles Garrett even assaulted Pittsburgh Steelers Quarterback Mason Rudolph after a play, taking off Rudolph’s helmet, and repeatedly swinging and hitting him with it. The assault was so serious that Rudolph was able to press charges on the Browns’ DE, but opted not to.

The NFL also found itself in controversy around the late 2000’s and early 2010’s after former players of the league got CTE, a long-term injury sustained by repeated blows to the head. The NFL had countless lawsuits against them from these players that had the injury, and the NFL attempted to sweep the settlements under the rug. Unfortunately for the League, the news broke out. CTE and concussions are still a prominent issue in the NFL today.

Many believe the NFL may be heading toward another controversy by letting these players with a bad past play, simply because they bring talent to the league. Does the NFL have a double-standard? The evidence points to that it does. The league hasn’t implemented any guidelines, or doesn’t have any consistency when it comes to when they fire players and coaches, and when they let them continue to play.