On Wednesday, May 4th, Herriman High School’s advanced theatre class had their end-of-year showcase! Eighteen acts were performed in this showcase and around thirty-seven students participated. The outstanding opening number was a rendition of We Don’t Talk About Bruno from Encanto, performed by the 2021-2022 Drama Officers, and was followed up by a dramatic reading of Blink-182’s I Miss You. The students in Mrs. Kaycee DeYoung’s advanced theatre have had assignments in their class throughout the year encouraging them to write their own pieces, and a few decided to perform them in the showcase. Some of these pieces include Peegz and Cheekenz written by Brynn Harker and Maddy Starr, A Historians Diary written by Acorn (Fisher) Ludlow, and Abernathy Cromberfish written by Lee Cummings.

A Historians Diary is a Sci-Fi monologue containing the writings of a historian from the far future. Acorn says the way he wrote this was “a bit odd” and explained how they ended up writing three separate monologues in the beginning, and just decided to combine them later to see what happened. He described himself as, “anxious the audience would get bored,” but they ended up loving it! Lee stated that Abernathy Cromberfish, has actually existed for much longer than this year, and was created in their “scriptwriting class led by Tanner Tate” sophomore year. She decided to make the story into a reality this year. The hilarious performance was very successful and ended up getting a standing ovation at the end.

So much talent was showcased throughout the night ranging in pieces from Broadway shows such as the Stepsisters Lament from Cinderella or If You Were Gay from Avenue Q. A monologue, The Box, from Breaking Bad was performed by Caleb Glad, and even a rendition of a bit from Studio C was performed. Senior Brie Schlenz (she/her) performed the beautiful song, The Fools Who Dream from the hit movie, La La Land. She says she chose that song to perform at the showcase because she had “always felt a connection” with that song. Brie said it felt less like she was singing about someone she knew, but someone who she wanted to be. She said, “Like a letter to my future self.”

The entire theatre class had the opportunity to participate in this year’s One Act play, The Least Offensive Play in the Whole Darn World, written by Johnathan Rand. This play was cast and student directed by Zoe Wagstaff and Radley Haws. The Least Offensive Play in the Whole Darn World is summarized as the live advertisement for the “Scriptcleaner 5,000” brought to you by ‘Shelly’ (Lee Cummings) and ‘Tom’ (Caleb Glad). They tell how the “Scriptcleaner 5,000” is an outrageous product here to solve all your theatrical needs when it comes to cleaning up classic plays or musicals that involve “offenisve” themes, such as violence, drugs, AIDS, or homosexuality so you can perform them in highschools. They say “If you are not satisfied, you’ll get your money back!”

One example of the “Scriptcleaner 5,000” doing its work was performed in a scene from This Is Our Youth, a play by Kenneth Lonergan. ‘Dennis’ (Angel Dietz) is offering ‘Warren’ (Austin Spencer) some “blow.” Now, in the original script, this blow was actually cocaine. But, in The Least Offensive Play in the Whole Darn World, this blow was just a box of tissues that Dennis and Warren proceeded to blow their noses with onstage. Angel Dietz (he/him) said he is not one to get nervous before performances, but his “adrenaline was spiked.” He mentioned that the piece wasn’t fully his taste, but overall he was thankful to be “a part of something beautiful with beautiful people, and (he) would never sacrifice that moment.” 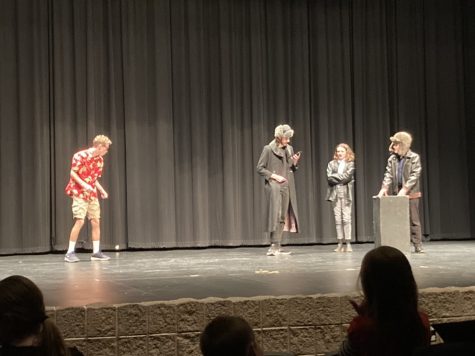 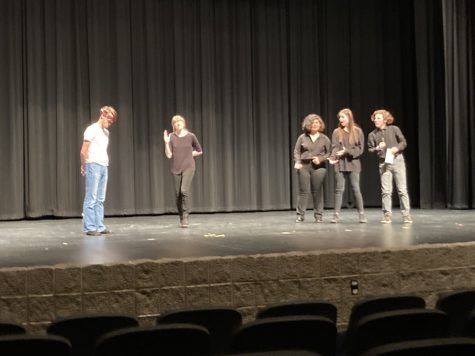 If You Were Gay from Avenue Q: Ava Beck and Henri Sasa

I Miss You: Conner Dean

On May 5th Herriman’s Musical Dance Theater class put on their spring showcase. Of course, this wasn’t the plan, originally the class was going to perform Mamma Mia but there were a couple of issues that popped up along the road so they didn’t get to do it. They performed many hit favorites that night including “Voulez Vous,” “You’ll Be Back,” “Say My Name,” “I Won’t Say I’m In Love,” “Le Poissons,” and many others.

Before the show, Junior Kaitlyn Losada (she/her) stated, “Personally, I’m pumped, getting to do something Mamma Mia instead of nothing. So I’ll take it as a win.” Senior, Noah Wood (he/him) (aka that one guy that does announcements),  told us “I’m excited to show off stuff that I elected to do. I want to show everyone my range and that I can act and sing.” Senior, Kaitlynne Cowart (she/her), says, “I’m excited for the show!”

After the show, the class was greeted by lots of support from friends and family. Senior, Trey Cobb (he/him), told us after the show, “I ‘Le Poissoned’ too hard but it was good.” There were many encouraging words given from the class to one another after “Voulez Vous,” the closing number. Most students agreed that they breathed a sigh of relief after they had finished, weeks of working on choreography for a show they didn’t even get to perform, but at least they got to do some of the numbers and scenes.

All and all, the shows were a hit, the crowds were engaged and loved them! 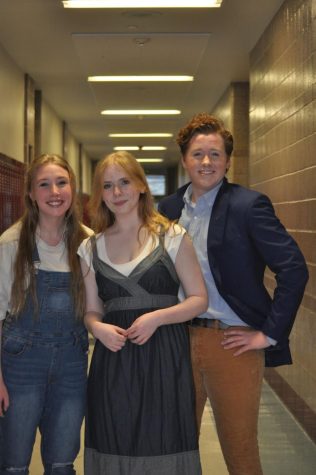 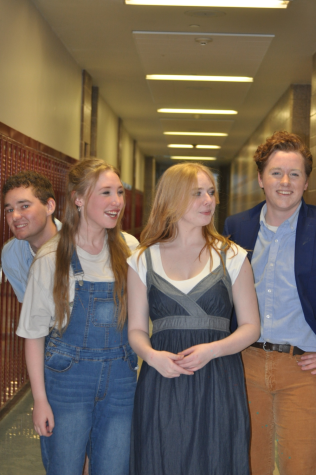